#4 On Being Overdue: Ughhhh 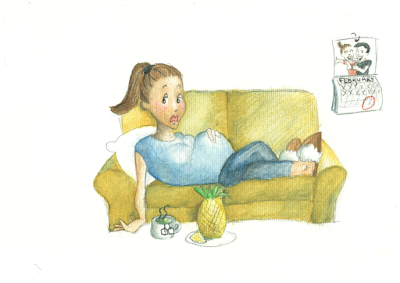 Overdue and over it: maybe you handle this better than me. Well, I'm going to moan anyway.


I am not overdue. Hell, it's a few weeks until I am even due.

I am still preparing myself for this stage, since last time I seem to remember it getting on my tits somewhat. So that and one or two other reasons have prompted me to write this pre-emptive note, as follows:

1) An overseas friend recently texting me to say 'Overdue. Ugh.' She's actually had the baby by now. That said, being overdue and over it is something I and may other women can relate to, and it's pretty hard to imagine for anyone else.

2) The mental ballache: having a few weeks to go, you already start to focus on the Due Date as a real D-Day. So like any other major date in your diary, your mind almost separates other upcoming plans, thoughts and events into two  distinct zones on a timeline: things happening before and things happening after. OK, this time round I am already trying to be more realistic/  less timeline-y. But the last time, upon hearing that all my mum's babies had been early, I even considered that it might happen two weeks sooner.

Now statistically this is not crazy, but you can guarantee how likely this expectation would be blown out of the water. The actual result? A tedious, painful, three-point-five week wait since Son was actually nine days over. What's more, the podgy little sod was just getting bigger and heavier in there and would be tricky to get out.

3) The physical ballache: already I feel all this. Yes, there's the rolling around from one piece of furniture to another like Dame Barbara Cartland / a giant pupa. There is, of course, the turgid ache of a lump stuck on the front of you; the leg cramps that seize and freeze up your calves in the dead of night so that you have to get up and walk around and / or furiously thump the muscle like a butcher tenderising a fillet. Yes, yes, there's all of that.

But what I've also found hard again is the frequent tendency, upon sitting down even for a second, for cement to start chugging through your veins, taking its sweet time circumnavigating the ass area before moving onto anywhere else. And never more so than when you are overdue.  And nobody else will ever truly understand this. Which brings me on to my next point...

2) I need to mentally prepare myself for Other People, i.e. those who have not been through it, who really have no idea how this all feels. So cue my tired seething when well-meaning* folk start prodding me on Facebook going 'Oi, where's this baby then? Ha ha.'

Ha ha. Last time Old Git here couldn't even bring myself to respond, because what do you actually say? 'No, not yet- soon I hope! "+ smiley / awkward face emoji (Oh I'm so sorry, are you getting impatient too? You poor sausage).

Or better still, 'Oh crap, yes. Shit, so sorry I completely forgot to let anyone know. Our two-week-old is just bouncing and well. Thanks for reminding me!' Come on, Other People, have a think for a mo.

3) The self-image. Yes, yes, Aesop told us that vanity is foolishness. But Aesop didn't grow a bloody baby, did he. Why just the other day, Son was typically bullying me out of bed by tugging at my wrists- 'get up, Mummy.' So I swung my legs around to sit on the edge of the bed and, sadly, face head-on the mirrored wardrobe.
With my weary, simpering look at my son, my flaccid frame as my shoulders slouched towards the mirror; it struck me how like a mummy orang-utan I looked. Gaumless and formless: ah, nature is beautiful. Now hurry up, nature, and do your sodding work speeding this birth along. No woman should have to go on like this.

So there's being positive and all that, but that can sod off. For now. Sometimes a good old moan works wonders.

However, on a more positive / productive note, I thought I might do something for women who might need a bit more entertaining, those for whom a mere moan is not enough. So I've included a wee crossword to get your brain cells sizzling (see this pdf and hell, print it off if you're really keen)


*I say this with some irritation, given that I don't think I've ever met a truly evil person who didn't mean well. Therefore for 'well-meaning' please read 'irksome / meddlesome.'