#6 On Wishing You Were Bilingual, With Children 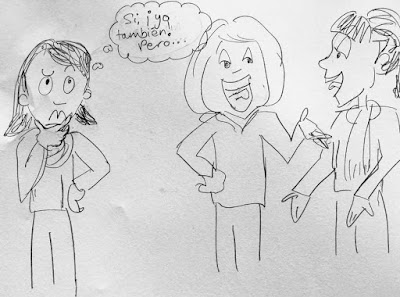 The conversation has moved on


So Son turned five the other day. The usual nostalgic whirlwind of photos popped up on Facebook and other apps, evoking memories of the experiences contained within these crazy first years: endless medical consultations, birth itself, joining a mums’ group, finding the right daycare, getting pregnant again and repeating it all. It’s a time of immense, irreversible change full of ups, downs and total unknowns. It's a time that's often navigated with best-guesses and stabs in the dark. It’s also a time most of us deal with in our native language.

Back in Sydney I admired my non-anglo mum-friends who had done all this in English; they were French, Peruvian, Brazilian and Polish. I wondered what that same time must have been like for them. Now I have a better idea. They were all more bilingual than I am now, but still.

I’m only referring to my own lack of bilingualism, by the way. Well, mine and Husband’s. Don’t worry about the kids, they are fine. More than fine, actually: in one year our previously monolingual son has acquired more or less the same level of Spanish - dialect and all - as his local peers; Daughter arrived with almost zero words and now switches easily between the two languages like it’s a mere trifle to her.

And NB this is not mum-bragging, by the way: it’s what you’ll get if kids their age move countries, to a place where so little English is spoken that their entire day outside the house is spent in the local lingo. Learning through necessity, not curiosity, tots are unquestioning little sponges of language, quick to imitate and assimilate. Unlike we adults, that is, with our hopelessly rigid concept of language and our attempts to translate things word for word. I’m no linguistic professor but I can see it all happening.

It’s so brilliant and it’s also damning. It highlights how clunky and die-hard my own attempts are in comparison, and I’m an English teacher and language nerd who, I might add, has been learning Spanish on and off for some years. Some days I feel all smug because I think I can rattle off clever phrases in conversation. Then I repeat them to my Spanish teacher and she patiently points out the million mistakes I’ve made. Some days I feel like I could perhaps chat about politics, others I ask a shopkeeper or electrician a question then stand there, blinking like a goon, while they repeat something basic to me that I have clearly not understood. In conversations at the school gates I try to multi-task, listening while forming the perfect sentence in my head to interject with, only to realise that during that time the conversation has moved on so I keep schtum. And in English, most would argue I’m rarely lost for something to say. Maybe this is an improvement, since I’m also funnier, apparently- but no, wait. By this I mean I’m now just goofy and clumsy, the ‘ah, bless’ kind of funny that used to be Manuel in Fawlty Towers, the English Policeman in ‘Allo ‘Allo.

At least these interactions are good-natured, though. Most truly are, though some are not. Recently I had a strip torn off me by a surly restaurant manager, helpfully joined by an equally obnoxious chef (great!). Though I still could not tell you what eighty percent of their tirade was about I can remember clear as day feeling my face burn with shame as I was struck dumb in every sense of the word. Like a puppy being ranted at, you know you’re being made a tit of - the universal language of shouting / pointing is all clear - but you’ve no idea what you’ve done, much less how to respond. Better Spanish would have empowered me in that situation. Mark my words, though, I still fantasise about having a Pretty Woman moment one day, returning with such impressive Spanish word-smithery that those same individuals are reduced to rubble after mere syllables. Not my most positive motive for improvement, but a powerful one.

And let me be clear: this is not an attack on the people of Spain, a country where I’ve probably encountered more kindness than anywhere else. This exchange could have taken place anywhere and serves only to illustrate how powerful learning that place’s language is.

Or something like that, anyway. I envied my kids at that embarrassing point, and it won’t be the last time. I remember coming home that day and wanting to reassure myself that at least they were being empowered, so I asked Son what important words he’d learned that day. His response was a proud one: it was ‘bum,’ ‘willy’ and various things besides.

Forget word-smithery; that would have done fine. Next time I’ll enlist his help first.

Erica
Posted by Unknown at 01:01 No comments: