#25 On Kids and Screen Time 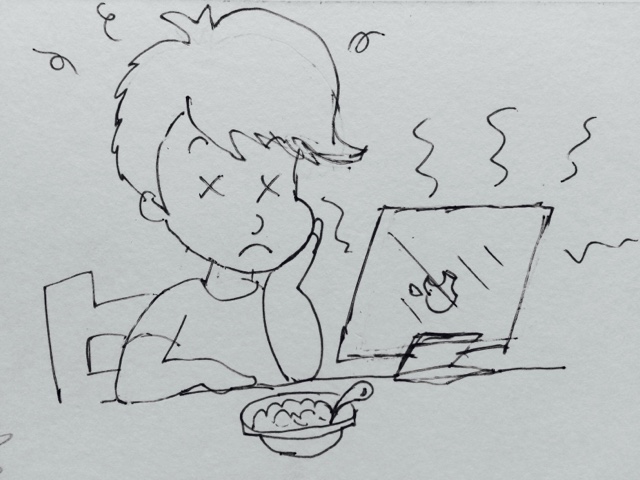 
..To clarify: we don't have a TV. Now before you go making judgments about us, thinking that we believe ourselves too lofty or literary to own such a thing, think again: we binge Netflix (on our projector) as much as anyone and our son likewise likes to binge the iPad.

...Which is really the problem (with our son, I mean), and I know we are not alone in this. Screen Time has been a mixed blessing for parents ever since TVs came about but for all the advancements of TV, Apple’s touchscreen technology surely makes their products far more interactive and user-friendly - for toddlers in particular - than any remote control. What’s more, the design of clip-based viewing apps like Youtube or YT Kids add to this by being especially accessible for chubby little hands and short attention spans. It seems great: free of the need for our input, Son is quite confident navigating these apps, with Youtube we use Guided Access so he can't come across anything unsavoury, and he is entertained completely for pretty much as long as we need him to be.

But to get why this is a problem, you really need to watch these apps. Or, you really need to watch YT Kids. Designed for the critters to use easily, it is garish and simple on every level, from the plinky xylophone theme tune to the extra large icons for play, pause, etc. But this also extends to its lobotomised content. Here, rather than simply with the Peppa, Paw Patrol, etc available on normal Youtube, there often isn't the licensing on YT Kids to access the shows themselves, in which case what you do get is either favourite clips in any language other than English or clips of an extremely dodgy visual / auditory quality. Better yet, there is my personal favourite: clips featuring footage of the toy figurines from said shows being either played with or reviewed by some random. So to be clear: your child will be much entertained by watching some Thomas the Tank toys being filmed pushed around a train track by a very visible human hand, all character voices supplied by the hand's owner, which is often a grown adult. What other work these odd individuals do all day is beyond me, but the amount of advertising on these clips is testament to the popularity of this model. It is also testament to the sad age of meta-entertainment we live in, where the 'Youtube career' (no, really) of goons like Pewdie Pie rests on the popularity of viewers not playing games, but watching the playing of games. Ironically, such apps now make for the most and least interactive form of entertainment for viewers. These include, of course, my son.

It is probably unsurprising, then, that when Son watches these clips he does so with a slack-jawed fascination which is part-transfixed, part-impatient and irritable. Like an 80s dad channel-hopping with the remote control, he'll dismissively swipe his way from clip to clip getting quickly bored with each. It would appear he is not enjoying himself and yet vast upset takes place should we wish to extract the device from him. It is the behaviour of an addict we see - covetous and yet ultimately unsatisfied - and at the end of a very long day it is tempting, like the loved ones of any addict, to opt for the easy life and let him indulge himself rather than kick off. I won't say we've never done it. Nor would various (actually, pretty much all) friends of ours who cite the same conduct in their own kids. And I'm sure neither would you.

Why do we allow it at all, then? Well, for the same reason parents have ever allowed screen time: it gives them a break. And in our case of having two children, we need a lot more breaks from entertaining Son than we used to. Consider the logistics: in the evenings when Husband is not home yet, the kids part company, since Daughter has the earlier bedtime, once her dinner is over. Or should I say, once she is over her dinner, since she likes to signal this to me by gurning, twisting and shrieking in her highchair to the point where only a tepid bath will soothe her. So during the rapid succession of bath-boob-bed for her, something needs to be done to entertain poor Son who sits finishing his dinner on his tod. Enter the iPad. And since I am trying to settle Daughter in another room, the last thing I need are Son’s shrieks haunting me down the corridor because the Guided Access on Youtube is limiting his clip control. So the dumbass YT Kids it is.

Now it is not always like this. There are times when he actually gets to watch his favourite shows - and even ones we like, eg/Sesame Street - and the overall result is less disturbing. Consistent with this is that extracting the device is usually easier, since if we give him a countdown and ask him to turn it off himself, he complies. His adoration of these shows is still plain, nonetheless, yet it is actually this that lends another important function to the iPad: as behavioural management tool. You should see the difference in his reaction: the threat of time out (current source of amusement) vs threat of fave-show-ban (source of untold anguish)

gets to almost one

The added complication is that some kind of record is needed of exactly what has been banned or reinstated and when. You can imagine how often we mess this up. Oddly enough Son sometimes helpfully reminds us anyway: ‘No, Mummy, Paw Patrol is gone because I was naughty.’ What better law enforcement than a cooperative one? It’s utopian, for sure.

So while I totally get the guilt about screen time, I also get that parental breaks are necessary. And hey, maybe it’s a fair introduction to the world of us functioning iPhone addicts. More than that, it’s exposure to popular culture, which every parental generation believes mind-numbing for their kids where every kid generation turns out to be fine. I mean, look at us, right?..?

In fact, maybe I’m missing a trick and it’s time to start working on my Youtube career.