#26 On Moving House With Children 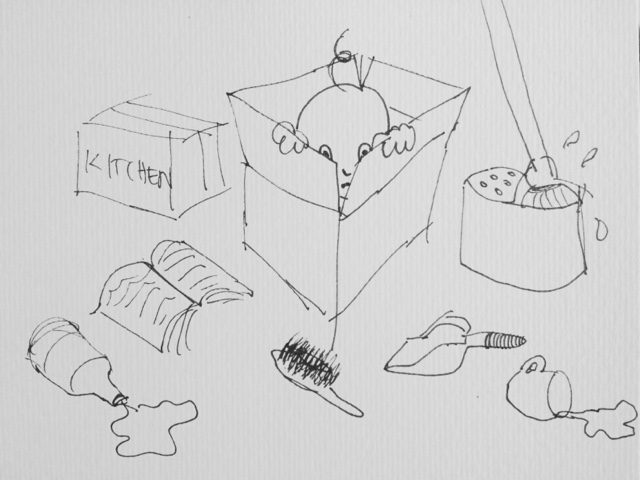 Be careful what you wish for

Sorry I've been under for a while. We've been moving house. With our two kids. And I've known for some time that people usually put moving house up there with divorce and bereavement in terms of 'stressful times in our life that we don't like', but it's only recently that I've really begun to understand why.

To give you an idea, take this comparison. After birthing a whole mini she-human, my second mini human,  in February, I went off the blog radar for, say, ten days. Maybe two weeks, tops. Now I shan't flatter myself that anyone has really noticed this time around but FYI after moving house it’s been almost six weeks since I’ve touched a keyboard. Yes, that’s two weeks versus six weeks, and for reasons I shall now attempt to outline.

At this point I should note that the comparison to a birth over divorce / bereavement may seem more accurate. Consider birth in parallel to creating a new home: both can be much looked-forward-to events, excitedly prepared for by trawling through pretty websites and buying lots of pretty things. Then, once the event itself has come to pass there is the joy of a New Thing In Your Life to jolly you through the trickier times. By contrast, divorce and bereavement involve, for most people, a sad loss of some sorts and are rarely looked forward to in any way (characters from Dynasty or Game of Thrones excluded). What’s more, much less are they enjoyed when they actually happen or are they looked back upon with any sense of nostalgia (though ditto those same characters). And this is where upping sticks stops being like having a baby and joins the latter two events because once it truly arrives the event itself, aftermath and all, soon reveals its true colours. They are murky indeed.

So what's really so awful about it, then? Well, it actually has nothing to do with how marvellous we think our new gaff is: bricks, mortar or geography.  We love the bigger house and the area (and if you need to know how ready we were to leave our old apartment, look here). We love the garden (an extra room!) the three floors and the fact that our son has his own chamber (the penthouse suite! Or, er, loft conversion). It’s none of this stuff. It is, to a huge extent, the packing. And the unpacking. And anything to do with things in boxes.

That's right: for the last six weeks we have lived, breathed and almost slept (in) boxes. Who'd have thought such a handy cube could kill so much joy. Well, it can because unlike packing for a holiday - where you only pack stuff you like for doing fun stuff you like - packing up a house starts with some of those fun things, if I'm not overplaying how easy it is to even know where to start, then you're left, in each room, to pack up the really crap things. And they take forever, by the way. Let me illustrate with a timeline: with a week or so to go, you start out with best intentions, putting good, useful things into logical boxes. So you continue, and you've still got a week, then still a week, then almost a week, then suddenly you're moving tomorrow. At this point the house is now an utter shithole but you’re all out of time and you desperately go 'fuck it' to your logical packing and start trying to find spaces for blu-tac, random old keys and cups with foreign coins in. Then once you retire to bed that night at 2am you are relieved that most of it is packed up.

It is a short-lived relief. Yes, the karma of your tired carelessness comes back to bite you hard as once you arrive at the other end, it is these same bits of crap that dog all attempts to unpack. You move them to one room just to have them out of your sight. Then you come back to that room, some days later, to realise it now looks appalling and is a dumping ground. And this is made worse by even the unpacked stuff that you do like because this place, and its storage, is different and a lot of stuff does not just fit away logically any more. In fact it can take weeks to work out exactly where the least annoying new homes for most things are. It has taken us six weeks so far and is still a work in progress. And so, in endlessly moving things from one room to another just to convince yourself that any one room is ‘done’, your house becomes like a giant Rubik’s cube where you kid yourself that one matching line completes the puzzle. And I’m not very good, or patient, at Rubik’s Cubes.

But where do the kids fit into all this? There’s a good reason why I’ve left them out until now: for someone who likes, well, to point out their quirks, I have to admit that they have been the least of our worries here. I mean, yes, we’ve had far more stuff to shift now that we have kids; yes we’ve had to shoehorn packing up into their daily schedules. Worse, there has been driving across the city in rush hour twice a day, three times a week to get Son to daycare back in our old neighbourhood, an hour round trip. But for all that the kids have helped us through what was actually the worst part of all: the moving-aftermath back at our old property. With crisp cheer the estate agent reminded us just how soon the property needed to be perfect again or else we’d lose our deposit.  Not satisfied with the stress of this deadline, we thought we’d add some extra fun by being cheap and trying to do lots of the cleaning ourselves rather than have professionals do the whole lot. The result: thinking it a ‘good idea’ to spend ‘just a couple of hours’ cleaning out the kitchen with the kids there. I.e. scrubbing grubby cupboards on all fours, all day, while they rolled around on a filthy floor, Son using up all my iphone data watching YT Kids (see here for how brain-addling that is) and Daughter picking up all manner of scummy things to put in her mouth. It was hellish.

But when I say they helped, it’s because they rarely complained while I basically abandoned them to being ignored by me on a vastly grimy, boring, depressing day. And not only that, in my own misery at how giant my task was, my own guilt at neglecting them for hours, they were my rock; Daughter, playing with a damp mop head, creased me up with laughter and not least of all when she appeared to have a pube stuck to her elbow. At another point I tried to hide the fact I was crying from exhaustion and disappeared off to another room. Then I heard a little knock at the door and Son came in to hug me, saying nothing but holding on more tightly the more I sobbed. To be fair, a few days later he started chortling at me, saying ‘you looked really funny the other day, Mummy, when you were crying. Ha ha, siiii-lly’, but nothing could undo how sweet the little jackass had been in that moment.

Moving on, the old house is but a memory now, the new one mostly finished. Summer is almost here. Everything is looking rosier. But challenging though it can be having kids, it remains an experience to be cast firmly apart from moving house and the rest of The Stress Trinity. Because nothing can light up the gloom like those pleblets can, really they are less a rock than two little precious stones.

Better sign off before I get too soppy. Damn them.