#14 On Children in Cafés 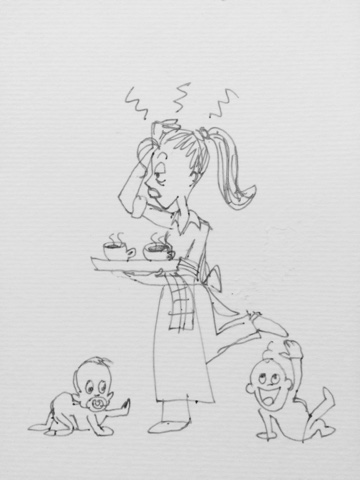 Things were very different back then


As a waitress I thought children were the pits. It was as if they conducted their entire restaurant visit through a megaphone, which not only blasted out sound but also cold, squashed chips and splodges of purée. If we staff were lucky, we'd be treated to one or two pint-sized escapees nipping around our ankles as we tried to carry hot coffee across the floor, performing a high-level riverdance in which we were speedily to deliver said coffee, unspilled, and avoid said child.

But it was the parents who were really to blame, of course, and deserve our scorn. They'd show up en masse at the door, a horde of huge, creaking prams between them, smiling hopefully while darting their eyes about to see which area to commandeer completely .

We'd tut amongst ourselves, 'Where the **** is that pram gonna fit?'
'Is it necessary for table four to move all the chairs like that? It's not a sodding crèche.'
‘Changing facilities? We’re not McDonald’s, love.’

I must make something clear at this point: my life was very different then, in my teens and early twenties, to that of Current Me. Now to be fair I did actually enjoy my work and give a crap about it, but the focus amongst us staff was still no doubt on chatting, flirting, lightly mocking the boss / clientele and getting to the end of a shift on ten espressos while nursing a dark hangover.

So this was all back in the day, the same day when I used to curse people who brought babies on planes. Now, as karma would have it, I am often That Parent. My two-year-old son is not that quiet in cafes. He does not eat that tidily and he gets ants in his pants within two minutes of sitting down. Our pram takes up more space than I would like.  And incidentally, yes, our toddler has screamed a plane down despite all our efforts to pacify him. My how times have changed.

Having my own babies has been like looking in a mirror at my former self, and every time I’ve been met with service that tuts or rolls eyes - however subtly - at accommodating my children, I think this. But even more than karma, I see mismanagement and a missed opportunity because, most cafes, mums are your daytime demographic*. Toys and allocated space for the kids, most awesome as they are :) :), may not be possible in all venues but basically, make us feel welcome and we will come. And spend.

Because there's another side to this issue. Yes, these days  I understand much better what mumming involves and karma has bitten my ass many times. But I do think a lot of mums who have been waitresses understand what that involves too, whereas some maybe don’t or, if they once did, they have forgotten. Take the Mess Makers, for instance. I read recently on a baby website one mum’s comment: 'AIBU (am I being unreasonable) not to have tidied up after my kids in a cafe?' the mess in question being chips and pots of baby food being left all over everywhere.

Yes, YABU. This post brought back so many memories which still stick uneasily with me of parents as bad customers: leaving mounds of goo and baby wipe without any attempt to clean up; leaving everywhere bits of food bought and not bought at that establishment. Yes, yes, of course you sometimes have to bring food for your nipper - I’ve done it many times - but for any of the above, at least do that awkward British thing where you try to tidy it up, in the hope that the staff will come along and insist it’s fine.  They generally do do this, and if they don’t, then maybe it’s a further case of mismanagement and all its trappings.

‘But I’m a paying customer, I’m entitled to make mess’, many might cry. Well, yes they might but the torrent of negative YABU responses to the post above, in their bandying about of words such as ‘rude’, and indeed ‘entitled’ would, thankfully, suggest otherwise.

OK, at least these people do pay and maybe there are worse out there. In fact I have seen them and those are The Occupiers. Of space and facilities, that is, as these individuals are not known to, you know, buy anything the venue is actually selling. I have seen, (sigh), entire groups of people where between roughly nine of them, babes crawling around, the works, about two coffees are purchased.  And this phenomenon seems to happen come rain or shine, by the way; cheek and stinginess are not just foul-weather friends. And these venues exist to make a living, winter or summer.

I know I’m not alone in my rant here. Inevitably, it’s a view shared by the venue proprietors and managers I know. But these and parents are not mutual exclusives. Many of these owners also have kids and, like many of us, can see both sides.

What's more, you don’t even need experience in this industry to ‘get’ what I’m saying; let’s not forget that the ‘AIBU’ post - and its shocked responses - were all found on the wall of a parenting website. Assuming that this is not somewhere non-parents prefer to come in their downtime, this speaks for itself.

So how to conclude this? Establishments, you want our money; we want your coffee. Let’s make this work with some nice manners on both sides.

Venues: be nice to these people
Parents: don’t be cheaple. Or cheekle. (OK, enough now).

*Mums - and therefore females -  happen to be the main demographic in my case, but I’m sure this extends to any parents