#24 On Having Multiple Children (or at least two) 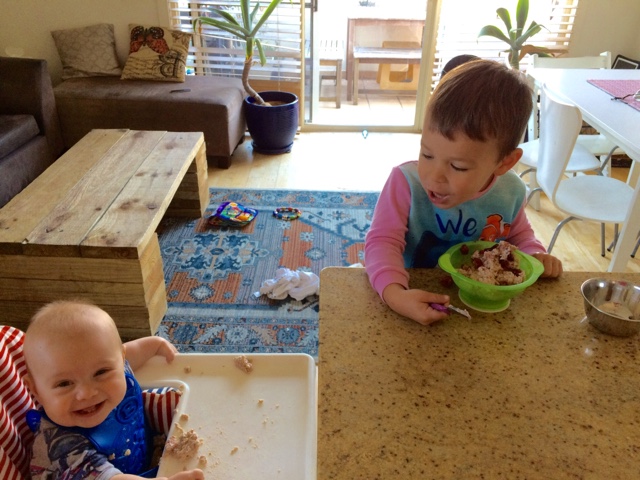 I’ve got this kid thing down. Sleep? Routines? Pacifying? Sorted. As it stands, I now have pretty much a 100% hit rate with all of my strategies and I don’t see that changing...

Or so I stupidly thought when I had just one child. Pregnant with my second, I mused over how it would be with two, you know, in the way you muse over anything which you can never truly appreciate until it happens. So far, my concept of ‘being a mum’ had involved honing my techniques for the previous eighteen months with Son, until I’d reached a point where I felt pretty secure in the whole business. A second would be easy, surely: imagine all the experience I could bring to the role this time. Imagine all the hypotheses I’d formed, into which baby #2 would neatly slot.

Obviously, I would discover, this was utter crap. I got heavily served. Yes, my ability to rock, shush and nappy-change an infant had been fine-tuned, though I’d argue that all parents figure out how to do all that pretty quickly anyway. Equipment-wise, I’d tried to be one step ahead; the brand of dummies my son had used had been  becoming - cheapo as they were - increasingly difficult to get hold of. Then, pregnant again, I remember going into a supermarket I’d never been into before, and seeing them stocked in their dozens, a myriad of sizes and colours, shining from the shelf like rare gems.

‘So this is where you’ve been hiding, you bastards’, I thought. ‘Come to me...I’ll take five, six, no….nine of you.’ So smug was I to have found them that I just hadn’t fathomed that my new baby, once born, would not simply need a little persuading to take a dummy, her eyes would widen and she would disgustedly eject said object, accompanied by Hammer Horror gagging sounds. So now, moan as I do about our current lack of space, I have a whole shelf in the kitchen dedicated to a mass of boxfresh dummies, ever unsucked, that I should probably try to sell or give away.

The tricky thing about parenting is that you try and be prepared, but preparation involves prediction and kids are often pretty unpredictable. Go and look on ebay or various kids’ classifieds and just look at the amount of toys for sale ‘never used’ or ‘used once and then he/she lost interest.’ As grownups and professionals we pride ourselves on our ability to plan ahead, not to be caught out, and yet little ones will often undermine this.

One major reason for this is just how different your newest's personality can be from its predecessor/s. Son? Bottle, dummy, cigar, given to him by a total stranger for all he cared. Daughter? Mammocentric all the way: it has to be boob so it has to be me. Son: sleeps anywhere, any time, like he’s on valium; in the pram to send him off all I had to do was take him over some rhythmic bumps (cobbles, a boardwalk, etc) and he’d be out; Daughter, the Princess and the Pea, takes far longer and bumps appear to ruin her day. Imagine actually taking a pram out and avoiding any kind of these; I urge you to try it.

That said, these differences tend to have presented only temporary issues once you begin to adapt to them. One thing that remains a constant is the effect of plural babies on your time and energy. Yes, you do become better at military-esque logistics. Your ‘Mary Poppins’ handbag becomes even more bottomless. You begin to wonder how just one baby used to take up so much of your time and effort. But dealing with a double onslaught of illness, having two under-threes sharing a bedroom where one shouts a lot and the other still wakes at night, is some next-level trickery. Often Husband and I have to take one each - She needs feeding back to sleep and He needs taking off as he’s insisting on sleeping in our bed at 4am- to the point where we become passing ships in the night. Unsurprisingly, the combination of broken sleep and physical distance does no wonders for a relationship; bickering definitely increases and in those poisonous silences that follow hissed exchanges, there are definitely more times where you narrow your eyes and send waves of hatred to the back of your loved one’s turned head. Still, that’s what those marriage vows were invented for, eh. Dammit.

‘This, too, shall pass’, all parents quote, as they reflect on the tricky, but transient, stages of having little ones. I know the same is true for us. There is one advantage that overrides these pitfalls, however. Having a sibling has made Son a better child - no, really - since he’d have gone through tantrumming and the terrible twos anyway, but we’ve seen another side to him. For all his loudness and mania, it is he who shushes us in the evening with a grave authority:

He is desperately protective of her, reduced to an impossible and almost comic gentleness around her. And the comic element extends to being their truest bond, because she is the most loving and indulgent audience of all of his performance and jokes. It is excellent to watch. And, dare I say it, probably worth relearning a whole set of skills for.


Facebook: Here's Looking At You, Baby https://www.facebook.com/lookingatyoubaby
Posted by Unknown at 20:14