Here's Looking at You in Spain, Baby, #1 The Big Move, or 'On Moving to Spain With Little Children' 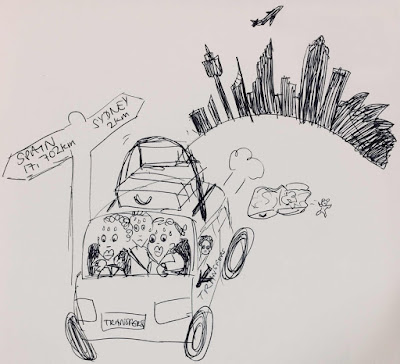 
So, well, sorry I've been away for a bit. Pretty much a year, admittedly. As the title of this post might suggest, though, we've had a bit going on; so much so that I am starting a whole new section of this blog devoted to this big new life we seem to have got ourselves into.

What has this life involved? Many things, too many to fit in one post. Which is good, since I'm going to, you know, need stuff to fill other posts. But just to illustrate: it involved an exit that had been considered for some time yet which stil became a frenzied, flapping stress-fest in the last few days (how is this the story of my life?), a cross-continental journey and an eventual landing of one Boeing 727 on some hot Spanish tarmac. From there, the adventure to Granada, Andalucia, was about to begin, and how exciting it felt flicking through all the Google Images in my head: the mighty, earth-red Alhambra Palace looming down over the city, the crumbling white houses all packed into the Albaicin hillside opposite. Two years of waiting to see all this for real was about to end in two hours of car journey.

But enough of the travel writing for now. It's now time to explain how and why we came to be here at all. Time to backtrack to the time of austerity which had preceded it.

So last time we spoke I was telling you all about dealing with solitude as a mum. While I would argue that there is something universal about that experience, it was definitely exacerbated and prolonged by life in sunny, costly Sydney: I had wanted to return to work, to re-skill after having Daughter, not just to have adult chat but to chat even with people who (gasp) didn't have children. But we were stumped at the first hurdle. Daycare for a second child cost more than I would be earning the days she was in there. Still, OK, we decided, for my sanity we could perhaps justify running at a loss (you get the idea how ready I was to be back at work- who, pre-babies, would do most work for free). And yet, just in case I was getting cocky, up rocked the second hurdle: the famous daycare Catch-22. I couldn't take work unless daycare was secured, and I couldn't secure daycare (including paying a whopping deposit, etc) until I had work to justify the cost. And then the picture just unfolded itself, day by day, before our eyes. We had:

And at the end of yet other skint winter's day in Sydney, another experience of getting adrenaline rush at the Aldi till in case the card got declined, Husband and I sat down and as he so beautifully put it,

So that was that. And before we knew it we were Googling and emailing our little socks off, not just dreamily perusing real-estate websites but contacting people who would actually fix us up with somewhere, not a perfect-somewhere but a start. And that, for now, was enough.

The rest became a blur of contract-signing, leaving-dos, packing and a horrible, stressful exit from our house where we'd so tragically underestimated how many shipping boxes we'd need that we ended up chucking decent stuff out on the street, GIVING our overpriced Dyson hoover to our next-door neighbours, having the airport transfer woman twitching uneasily as we were running so late, my brother madly helping us to pack the kids, our stuff and our lives into the grumbling minibus.

But none of it mattered. We were finally doing it. Shit had just got real.

More next blog on what actually happens when one moves to Spain...with children in tow, obvs…