Here's Looking At You in Spain, Baby #3: On The Attitude to Children in Spain

#3 On The Attitude to Children in Spain 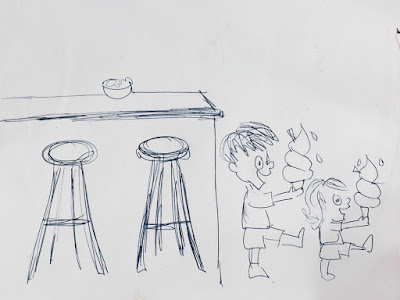 More VIP treatment than we get

It takes a village to raise a child, it has very often been said. In Spain, I’d argue it takes a city. A country, even.

And just what on earth am I on about? Well, actually it is the way people treat children here, especially little children, and how everyone sees raising children with a sense of community that is so different to the world I am used to. And I’m not just talking about having playdates and being nice to your friends’ kids, or at least those kids with whom you are on first-name-terms, because here it is something bigger. It is the way people approach strangers’ kids, those they do not know - or owe - from Adam. It reveals a pretty different outlook, to say the least.

In one way, this can mean a ‘shared’ approach to discipline. The other day, a couple of friends and I were sat in a plaza where our kids were playing with some loose stones on the ground. Typically, wine+occupied children meant a marvellous sense of relaxation for us. But it was short lived. Suddenly, the atmos was punctured by an old lady’s head appearing from a nearby doorway, whereupon she commenced scolding the children (and, indirectly, us parents) for removing the stones from her doorway. After the initial deep shame you still (yes, still) feel from being told off by an elder, we quietly admitted that not only was it fair enough, but that this old lady had some guts. She neither feared our response nor that of our kids, she’d said her piece then left it at that. She was badass.

But this approach is not just about chastising kids, unabashed. Do not mistake this for a culture where kids are pests and that they should be seen and not heard, because it’s really not the case. What there is here is an overriding affection for little children, other people’s children as much as anyone’s own, and the same fearlessness in showing them that affection. In the supermarket, on the street, on the bus, people of all ages stop in their tracks when they see any random toddler, and they coo and smile at them. They make physical contact with them. Elderly people do it the most of all, often ruffling my son’s hair, chattering away to my daughter and patting her hand, especially if she seems upset. For primary teachers, it's totally normal to cuddle their students all the time which is so different from what my own teacher training taught me.

Kids are practically VIPs here in so many social settings. In a tapas restaurant the other day, the waiter bent down to my children's level, took both their hands and whisked them off behind the bar. They chortled with delight and re-emerged moments later with a chocolate treat each. In another plaza one day, a smiling old man picked up my daughter and started dancing around with her to the flamenco music, while his friends tried to show her how to do the proper hand movements. All was done in plain sight of, and close proximity to, us the parents, which I'm sure helped it to feel so un-weird. Neither the waiter, nor the old man, had ummed or ahhed, they’d just gone and done it which clearly highlighted how normal it all was. And yes, when we first arrived here I would be struck by how different this was to what I was used to. My US, Canadian and Aussie friends have basically said the same. But we also agree that it's hard not to be taken in by the warmth of it all here, by the reminder that kids remain the greatest leveller among people.

Perhaps a bigger difference is with child accidents. If your kid falls over here, someone will rush to pick them up and cuddle them first, then try to decipher who and where the parent is. I have now found myself doing it without a second thought where once I might have hesitated. Again, in the culture I grew up in- and which my kids were initially born into - it just wouldn't be so normal to rush and cuddle a kid you didn’t know. Or, more, accurately, whose parents you didn't know. Your instinct would be to feel concerned that the child was upset, of course, but you'd locate the parent first so they could take over with the physical bit. You'd thereby alleviate yourself of any of the weird or suspicious looks people might give you because warm or physical engagement with someone else's kids is reserved strictly for close friends, family and officially-employed childminders. And those of our parents’ generation assure us it was not always like this, with such a fear about strangers’ intentions towards our kids. Even though our culture has always been more standoffish, they argue, it is a growing, media-fed paranoia that is now to blame. Whatever the source of the fear (and I suspect it to be a mixture of the two) the outcome is the same: what happens is that, as with most things, the more self-conscious you are made to feel about your own behaviour, the more critical it makes you of others’, which in turn makes them more self-conscious...and so the cycle is perpetuated. A paranoid-judgy cycle which seems to exist a lot less here.

And look, I'm not saying that child-related crimes never happen, or that you should never trust your instincts when you feel that your kids are in real danger. I'm also not advocating being totally naive around something our parents never had to deal with: over-sharing info about our kids on the internet (and this is coming from me, by the way, who used to share way more than I do now). But neither are Spanish people saying any of these things. And yes, crime statistics can be unreliable because they depend on how many crimes actually get reported at all, but even so the stats do not suggest that Spain is an unsafe place to be a little kid. They in fact suggest the opposite.

And don't get me wrong, it's hard to undo thirty-odd years of what I've become used to. That old British reserve and awkward stiff-upper-lip will probably always be a part of me, too. It's also a part of some of my favourite comedy and literature, to which I fully intend to expose my kids. But if we stick to our plan and stay here for the long term, it'll be interesting to see how those two turn out as a hybrid of the two cultures, especially in their approach to children. In reality, I suspect it'll just be another one in a number of ways in which we'll be embarrassingly old and out of touch.