#4 On Enforced Relaxation With Children in Spain

#4 On Enforced Relaxation With Children in Spain 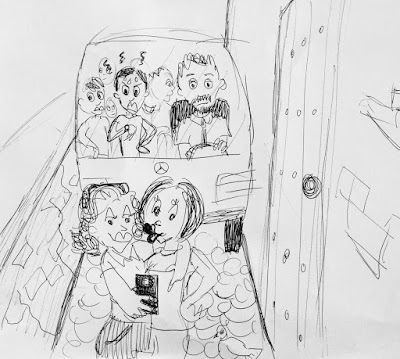 Don’t they know how important my time is?

Anyone who knows me will know that I am constantly in overdrive. Overplanning, underestimating and running late are just part of my DNA. And it's not that I don't care. Both things stress me out and yet, on one hand, I take stock and think how ridiculous it is that someone in their late thirties still does a light, slightly sweaty jog to make appointments on time; on the other I curse my own idiocy for thinking that bringing kids into the mix could ever have helped this situation. Duh.

And so it is with kids, and I know I am not alone here (please tell me I'm not). Flapping about, trying to get out of the door in the morning with T-minus-ten seconds before we have to leave (see this post for earlier comment on this), unable to locate Son's left shoe whilst also trying to brush his teeth so hurriedly I risk making his gums bleed and he keeps going  ‘ow'. Daughter, when we dare to try and put her cardi on, screeches, twists and runs away, knocking the pee-filled-potty so hard it splashes, then she disappears behind the sofa. When we try and coax her out like a frightened kitten, she laughs maniacally at us and our stupid, stressed-out faces. Once finally out of the door, we plough down the street with the pram, tutting and moaning at Son each time he obliviously stops to point at ants or try to pick weedy flowers.

And then I once again take stock. I am grumpy and exasperated or at the very least I am pink and a bit sweaty. I am most probably being short with the kids who don't understand Time or why it matters. It is my fault we are running late. At their best, they are just being kids and at their worst they sense mine and Husband's stress and treat it like a comedy show. Either way this rushing is just not working. What is more, the more time we spend here, the more we realise it is not just the kids who look bemusedly at us, at these times.

To elaborate: being in a rush with kids may be stupid; being in a rush with kids in Spain is just pointless. There is a convenience store called Coviran here, a bit like our dear Spar franchise in the UK. In this one local Coviran, the lady who runs it sashays around in the same nonchalant manner no matter how busy it is. She usually has a lit cigarette resting nearby, which she will finish, if she so chooses, even if you are waiting at the till. And don't get me wrong, locals complain about her  - or at least her fags - as much as anyone; the issue is that she just doesn't give a monkeys.

I have a grudging respect for this woman. She sees your hurry yet does not let your problem become hers. Another such situation is on one bus route which needs to share the same ancient, cobbled road as a million pedestrians, most of whom oblivious tourists taking photos, and often the bus needs to slow down to a near-halt as these people reluctantly drift out of its way. I feel my natural reflex to tut and tense begin to take over, even if I don't have an appointment to keep since - newsflash - it appears I just do not like being held up. Don't people know how important my time is?

The driver, on the other hand,  never beeps. He never so much as sighs. He just chills and trundles the bus along because he realises something important: if you don't like this pace of life, then don't be here. And back to the kids: if you are going to stress about being late, either organise yourself better or just go Spanish, as my kids are happily doing, and chill the hell out. Otherwise, you are just bumming people out, my friend.

Because this makes me realise another thing: inflicting your panicked hurry on someone else, especially someone not inclined to hurry, has a huge self-importance about it. You're like the guy driving up everyone's ass on the motorway to get somewhere 40 seconds sooner. And once I admit this, albeit grudgingly, to myself, a couple of epiphanies happen. Firstly, if you haven't got 40 seconds’ margin for error in your plans, your timing needs some serious work.

Second epiphany: Son recently had a last-minute birthday party to attend and while we'd grabbed a present, we had no wrapping paper. Ducking into a newsagent's near the party to request some, the young guy behind the counter smiled and beckoned me to pass him the presents so he could wrap them for me. The result: over the next five minutes or so, various other customers traipsed in, some held waiting by his so-dedicated gift-wrapping, some served quicker, but nobody complaining. Once finally finished, he passed the gifts to me with a smile. As he saw me fishing around for my wallet, this turned to a bewildered look and he flicked his hand with cheery dismissiveness- ‘no pasa nada’. Literally: 'nothing happens'/ nothing bad will come of this.’ In English terms: don't worry about it.

Don't worry about it? But worrying is my trademark. It's what defines me. I love being on-edge and flustered. Everyone around me loves it, too.

Or maybe it's time to really go to town on that 'when in Rome’ cliche and be a more zen me.

I'll let you know how I get on.